Raskolnikov, the main character in Crime and Punishment, at one point blurts, “Man can get used to anything, the beast!” He has hit upon a paradox: adaptation is both quintessentially human and dehumanizing. Humans can acclimate themselves to a wide diversity of customs, beliefs, and practices. But although we can feel “at home” with almost anything, we should not. To conform to some things would betray our humanity, our ideals, our conscience.
The question is which customs are morally acceptable ‘homes’ for humanity and which are not. 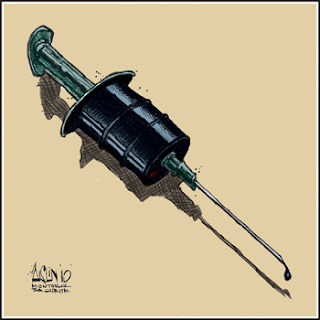 Today, we are accustomed to an extreme fossil fuel addiction. To get at the increasingly hard-to-reach remaining reserves, humans are scalping boreal forests, decapitating mountains, drilling oceans, and injecting chemicals into the Earth. The scale of these undertakings should be mind-boggling – there is one oil project in Russia that costs the same as building 145 Hoover Dams. But we’ve grown used to this sort of thing.
We are despoiling the environment and destabilizing the climate. And Americans are no happier today than they were in the 1950s before our addiction hit such extremes. Development in America via growth and resource consumption long ago outstripped any justification in terms of genuine human well being. Our society commands the most rational scientific and technological means but it puts them in the service of insane ends.
Over the past decade, this insanity has come home to roost in Denton. Advances in hydraulic fracturing (fracking) and horizontal drilling have increased natural gas production around here. Denton is home to 267 wells with another 188 on its outskirts.
With several other citizens, I spent the last year and a half helping the City rewrite its rules for fracking. We were able to get some improvements.  For example, the setback distance from wells was increased slightly and new practices for reducing emissions and spills will be implemented. But fracking will continue apace, complete with flaring and massive water consumption and chemical use.
We can take solace from Thomas More: “if long-established vices can’t be reformed just as you might like, that doesn’t mean you should refuse to participate in government, any more than you should abandon a ship in a storm simply because you can’t control the winds.” As More advised, we worked within the system and did not bother with things outside of our control –laws that favor resource extraction, loopholes on fracking, and the dictates of American energy needs. We took all of that as simply given facts and pursued the changes we could yet muster.
In retrospect, I’m not sure that was the right thing to do. Certainly, it was the ‘reasonable’ path. We couldn’t expect City government to do anything about those larger givens. To get anything done, we had to accept those limitations and squeeze whatever juice we could out of the frail lemon of municipal authority.
But I can’t help thinking about the reply given to More by his friend Raphael. He argues that if he were to adopt the approach of working within the system, “the only thing I’d achieve…is that, while I was trying to cure others of insanity, I’d be acting like a madman myself.” Indeed, there is something mad, or maddening at least, in setting aside the root issue (our ideal of the good life) in order to debate the details of allowable decibel levels for drilling rigs and what kind of fence must surround them.
I didn’t take up those deeper ‘givens’ about the way our laws are written and the way we lead our lives. But unless we address those, at best we can only make cosmetic changes and, at worst, we may actually help society achieve a “more accomplished lunacy.” If we make quieter drilling rigs and better fences, we can drill in more areas! Someone has got to question the system itself – the very laws, customs, and beliefs that condone such energy extremism. That’s why I applaud the Sierra Club for endorsing acts of civil disobedience (for the first time in its 120-year history) against the Keystone XL Pipeline.
Civil disobedience is the most powerful democratic way to shake off some vile habit we have gotten used to. Or, we could follow the fatalism of Redstate.com blogger Erik Erickson who recently opined that climate change is “a problem we probably have to get used to, as opposed to something we can cure.” We have to get used to it, he argues, because we are not going to kick our escalating energy addiction.
Denton is now slightly safer from the dangers of fracking. But the gas under our feet will all be extracted and combusted. The same holds for all the oil under the forests and seas and all the coal under the mountains. Unless. As the Lorax wrote, unless…
Posted by Adam at 5:46 AM