This summer while students were away, EagleRidge Energy was busy. They received at least nine permits to rework or drill new wells around UNT, including one next to Apogee Stadium.
They are now getting ready to drill and frack four gas wells near several apartments where UNT students live...along with other Denton families and residents. They just got approval from the Texas Railroad Commission. And last week the City of Denton agreed to lease their share of the mineral rights involved. The wells are slated for the 3100 block of W. Prairie Street. They will be drilled horizontally to collect the minerals thousands of feet below Prairie Hollow, University Courtyards, and other apartment complexes.

Here is the aerial photo from the City Council agenda, the 10 acre site is marked with the black dashed lines just on the other side of I-35. NOTE: This is not the platted gas well site, but rather the 10 acre patch of minerals that are owned by the City/County. The actual well site is further west - you can see that in the image below (third image). My thanks to Kevin Roden for clarifying this confusion on an earlier version of this post. 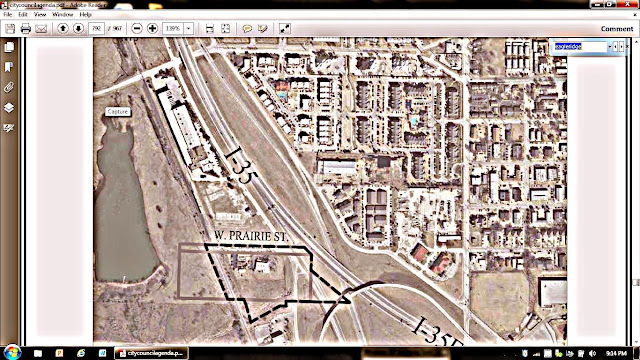 Now I am going to show you some screen shots from the Railroad Commission's new GIS map viewer. This is a pretty slick tool.

Here is the first shot from further out to give some perspective to the planned wells. The little red spider-like asterisks indicate the bottom-hole locations of gas wells. The thinly drawn pentagon shapes are the locations of wellheads for horizontal wells. So if you see a pentagon with a line to a red spider thing that means a wellhead (pentagon, so actual surface impact/pad site) with the horizontal wellbore (line) to where it terminates (spider thing). If you just see a red spider thing with no pentagon and lines, that means (I think) a vertical well so the bottom hole is the same spot (directly beneath) the pad site. Little blue circles mean a permitted gas well (but not up and running yet). 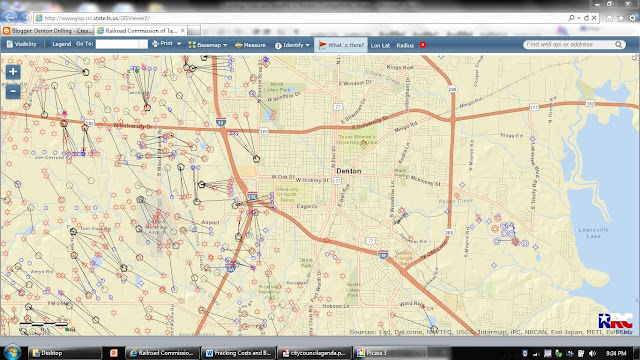 And here is a zoomed in shot. Notice the four blue circles (34382-34385 are the API #s) to indicate the permitted status. Some interesting things to note. There is already a well there, apparently, so this will be a pad site with five wells. The laterals are going to access minerals directly under Fouts Field, intramural fields, other UNT property, and apartment complexes. And notice that the pad site is right along a creek that drains a little reservoir and eventually joins Hickory Creek. I guess this is in keeping with our ordinance, but P&Z should take a close look at this proximity to surface water when this project comes up for a permit. 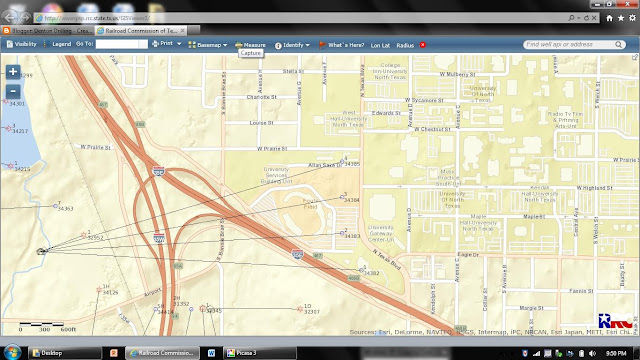