Frack to the Future: Why Are Drilling Rigs so Close to Homes in Denton?


Denton’s new drilling ordinance established a 1,200 foot setback between gas wells and protected uses like homes. But the future of fracking in Denton is going to be a story about gas wells much, much closer to homes than that.


We first got a glimpse of our future in April, just a few months after the ordinance was passed, when a development was approved that would put homes less than 250 feet from gas wells.
Now the picture is becoming even clearer. EagleRidge is drilling two wells simultaneously off of Vintage and S. Bonnie Brae. There are some homes just 100 feet from the pad sites. Many more homes are just 500 feet, or less, away. The diesel engines on site are pumping out black smoke. 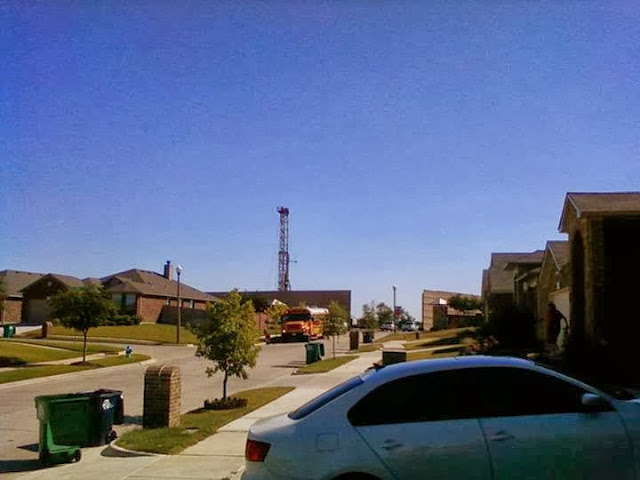 I took this picture down there as the school bus was dropping off children. You can see one of the wells (south side)  – there was another one, even closer, behind me as I took the picture. The future of fracking in Denton is going to look like this: polluting industries plopped right next to houses. And all the activity we are seeing now is just the appetizer for the rush that is going to happen when we really start exporting natural gas and prices spike.

Here is the Railroad Commission GIS image for the wells.

And just tonight, the Planning and Zoning Commission approved another project that will bring homes 100 feet from a gas well.
You might wonder how this could be when the new ordinance seems to make this illegal. The answer is that the 1,200 foot setback in the ordinance does not apply to situations where new homes are built around existing gas well pad sites. I don’t quite know why this is. It has something to do with vested rights…but it also just seems to be a terrible oversight in the ordinance. DAG recommended fixing this problem. But that idea didn’t get any play.

Most of the pad sites that will ever be in Denton are already platted and at least partly developed. And most of them are south and west of town where lots of our population growth is likely to occur. So, we are going to see more and more situations where homes are in very close proximity to pad sites where new wells will be added and old wells will be reworked and refracked for years to come. And none of this will be covered by our so-called current ordinance.

We have learned that fracking and neighborhoods do not mix. But we are going to keep on mixing them.


Some will say that this is acceptable, because those homebuyers are making an informed decision to move next to a gas well. But they are not. They don’t know it is coming. I have heard from several folks in the neighborhood where I took this picture, and they tell me that this came as a surprise. Some say they wouldn’t have bought homes there if they knew this was going to happen.
Oh, and readers of this blog won’t be shocked to learn that the people in this neighborhood do not own any of the mineral rights and, thus, are not making a dime from the drilling. Records from the Denton Central Appraisal District show that the mineral ownership of these wells is split between five owners in Dallas, Austin, Abilene, and Lewisville.
Posted by Adam at 9:12 PM