Here is this blog in meme form: 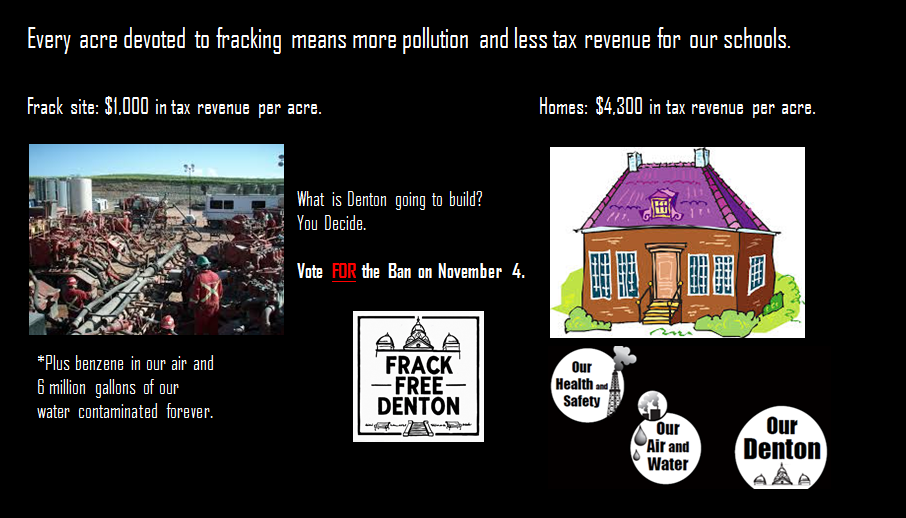 In June, the industry released a report (by the Perryman Group) about the costs of the fracking ban in Denton. I guess they figured that no one would actually read the report.
But I did. And I found out that the industry’s own numbers prove that the fracking ban will be a net positive for Denton’s economy.
Now, at first I just pointed out the fact that the report confirms fracking is a miniscule part of our economy, comprising a puny 0.2% of Denton’s gross product and 0.5% of tax revenues. And that's taking their own numbers at face value even though they are doubtlessly exaggerated in their black-boxed methodology.
But now we can add to that assessment by putting their report in the context of Denton’s overall land use and economy as detailed in the new Denton Plan 2030.
You see, the industry report only looked at the costs of the fracking ban. Of course, all decisions have costs. You’ve got to look at the benefits too and see if they outweigh the costs.
Kevin Roden has already made a strong qualitative case that the fracking ban will bring a boom for our economy.
But now I can add a quantitative case. The ban will bring significant, measurable benefits for our economy.
All I had to do was look at the industry’s own numbers and ask how much gross product and tax revenue fracking generates on a per acre basis. Then I looked at the Denton Plan 2030 to see how that compares to other forms of development.
It turns out that fracking is an embarrassingly UNPRODUCTIVE use of land. Every time we allocate an acre of land to fracking rather than other land uses, we forego significant economic benefits.
Fracking generates about $55,000 in gross product per acre. Not bad. That is, until you compare it to the $114,000 generated by the average acre of land in Denton (over 10% of which is undeveloped).
Fracking generates about $1,100 in tax revenues per acre. By comparison, residential development generates about $4,300 in tax revenues per acre, and that’s assuming today’s median-priced homes. (The figure for commercial is $9,600 per acre.) Plus, homes appreciate in value over time, meaning more and more tax revenue, whereas frack sites depreciate over time (eventually leaving a devalued, blighted brown zone). Oh, and fracking fouls our air, contaminates our water, and devalues neighborhing properties.
It turns out that fracking is one of Denton's least productive land uses. I can’t thank the Perryman Group enough for showing us how much stronger our economy will be once we ban this economic under-performer!