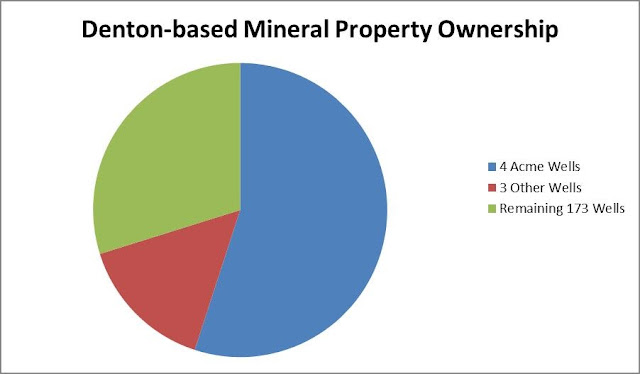 All seven of these wells show basically the same ownership pattern – which as you will see means lots of Denton-based property owners holding the small shares and absentee owners holding the large shares.
So, let’s just zoom in on Acme Unit 1H. There are 265 mineral owners with leases on this single well. Of that number, 195 are Denton-based owners. That’s 74%. 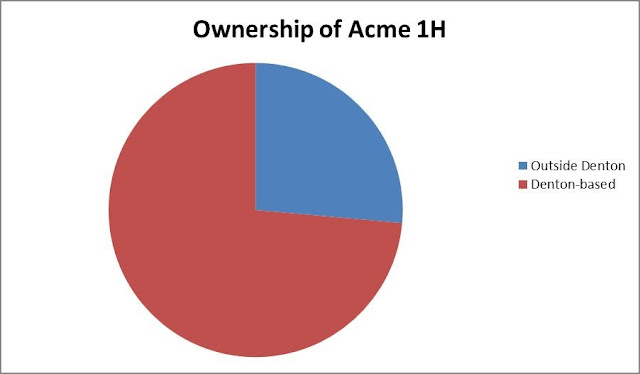 The total appraised value of Acme Unit 1H is $462,870. But let’s just focus on what the owners actually receive and remove the amount taken by the operator, NGG Gathering Company (out of Midland, TX). That leaves us with $283,180. Let’s treat that as the pie that is shared by the owners. So how is that wealth distributed?
Surely, since Denton-based owners account for 74% of the properties involved, they must take home about 74% of the money. Guess again.
Actually, Denton-based owners only take home $83,740. That’s just 30% of the wealth. 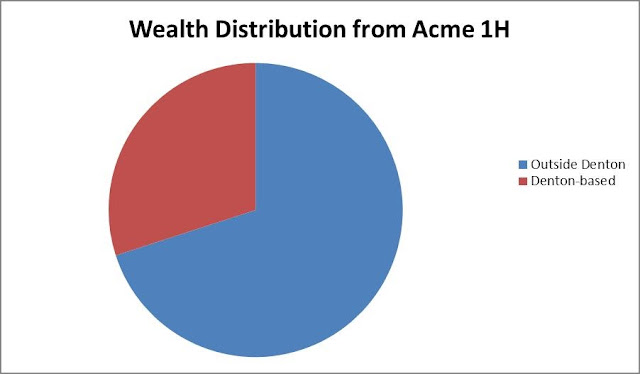 And of that, one Denton-based owner holds $31,670. That is the City of Denton itself.
So, here is a situation where appearances are deceiving. It looks like lots of local ownership, but in reality the wealth – even from these “hometown” wells – is drained outside of Denton.

Why is that? Most of the biggest stakes in this well (and the other Acme Units) are held by a corporation in Midland (not the operator); a Lutheran Church in Sioux Falls, South Dakota; Baylor University in Houston; a real estate developer in Corinth; and some individuals in Plano, Richardson, Dallas, and Arlington.

But why is that? I don’t know for sure. But it must be driven largely by the historical legacy of the split estate (where mineral rights can be divorced from surface rights) combined with years of subdividing land and swapping land ownership.