Where Denton Dumps its Fracking Waste

To hydraulically fracture a gas well around here you need about three to five million gallons of water laced with fracking chemicals. When the well starts to produce, some of that toxic water stays below. But some of it comes back up, carrying not only the fracking chemicals but also naturally occurring radioactive materials. The stuff that comes back up is called “produced water.”
Now, in Pennsylvania they often try to treat this produced water, but it doesn’t work too well. Around here on the Barnett in Texas, operators contract with trucking companies to haul produced water to salt water disposal (SWD) wells also known as injection wells. ProPublica’s Abram Lustgarten has a great series on these wells, showing how they are under-regulated and based on sketchy assumptions about what happens to the wastewater once it is pumped down the hole.


Across the country, there are over 680,000 of these wells (52,000 in Texas), and they have shot about 30 trillion gallons of toxic liquids deep into the earth. Here’s a blurb from one of his articles that should get you concerned about this issue:
"In 10 to 100 years we are going to find out that most of our groundwater is polluted," said Mario Salazar, an engineer who worked for 25 years as a technical expert with the EPA's underground injection program in Washington. "A lot of people are going to get sick, and a lot of people may die."


The nearest injection well to us is the Casto SWD well [API #121-32954] permitted and drilled in 2007 by Chief Operating, LLC. This well is currently operated by Bridgeport Tank Trucks, L.L.C. The well was permitted by the Railroad Commission to accept up to 25,000 barrels of water per day. Tanker trucks unload their produced water into one of about eight huge tanks on site where sediments settle out. They then pour the water down the hole, where the Ellenburger sandstone formation (below the Barnett) wicks it up like a sponge. The disposal range is between 8,600 and 12,750 feet.
Here's a picture of the tanks - you can see a couple of tanker trucks (white cabs) behind the yellow construction vehicle. 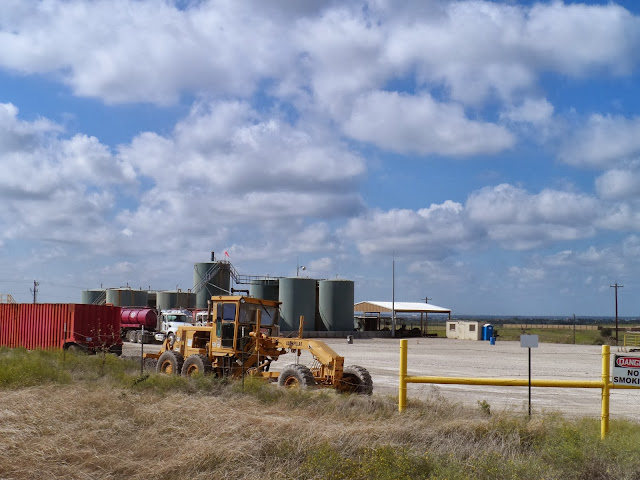 Here is a GIS picture. The well is in the red circle. Robson Ranch is in the green square. Ponder is up there at the blue triangle:

I can't find the figure for how much produced water has been dumped down this well. But I can do an estimate. They claim in the permit that they expect to average about 15,000 barrels per day. The well was validated in late 2007, so let's say it started accepting waste in 2008. That would mean that about 22 million barrels of toxic liquids have been pumped down this hole.
The permit notes that there are no wells within a ½ mile that go that deep and “thus there are no avenues for the vertical migration of fluids (zonal isolation).” Of course, the well casing may lose integrity (Lustgarten notes that one well integrity violation was issued for every six injection wells inspected). But also note there are several wells surrounding this site that go over 8,000 feet (sometimes 8,400 feet) deep. That’s pretty close to the disposal zone.
This is where most of the produced water from Denton's wells is dumped (we don't allow injection wells within the city limits). It's worth wondering what is actually happening to all that toxic waste. Will it come back to haunt our kids?
Posted by Adam at 9:06 PM