No Permit for Frack Water Transport

Thanks to the super sleuthing of Amber Briggle, we discovered this morning that City Council had on their consent agenda a curious item (see 4DD). They were about to approve (so it would appear) a permit for EagleRidge to use City property for purposes of overland transport of water. This would be just south of Vintage road, where they are getting ready to frack one of three wells in extreme proximity to homes - see a picture below, which was snapped recently by Calvin Tillman. In short, EagleRidge wanted an easement to get frack water to and/or from the site(s). 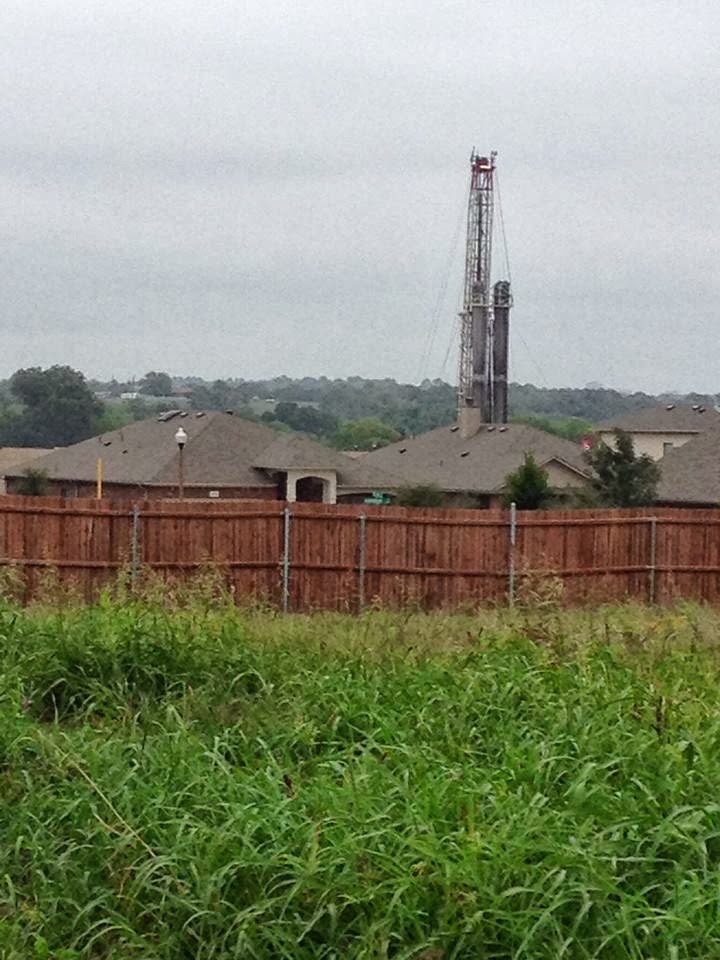 City Council pulled the item from the consent agenda after Amber and Cathy McMullen spoke up about this in their work session today. That meant we were able to speak to the issue tonight at City Hall. The result was that they have postponed their decision. The whole thing went down in a strange way...enough to make you think something deeper is going on under the surface. But anyway, stay tuned as this issue will resurface soon.

In the meantime, here are my remarks from tonight's City Council meeting:

I am here to ask you to deny the permit to EagleRidge that would allow them to use City land.


This January with our ordinance, you decided that fracking and neighborhoods are incompatible land uses. You expressed this value – and this vision for the future of Denton – by adopting a setback distance of 1,200 feet between pad sites and protected uses like homes and schools.


We have since learned that this ordinance does not apply to most of the drilling that occurs now in Denton and that will occur in the future. The ordinance has more teeth, but it has nothing to bite, because of legal constraints imposed on the city.


Thus, we find ourselves in a situation like that at S. Bonnie Brae where three wells are being drilled and fracked within 200 feet of a neighborhood. I was there one day to watch the school busses drop off children. Right next to the bus stop was a drilling operation chugging out wave after wave of diesel fumes. And just a few hundred feet down the street was another one doing the same thing. And this went on for over a month. And then the fracking will happen and it will be another two weeks. And no one in those neighborhoods owns any minerals. They are getting the pollution but they are not going to be getting any royalty checks in the mail.


I spoke with several young mothers who live in that neighborhood. One of them told me she is keeping her children indoors to try to avoid the pollution. She thought the fracking was almost over and was dismayed to learn it had not even yet begun. The other woman has a three year old son whose immune system is compromised and has been to the hospital twice since the rigs came to the area. Another woman told me she can watch the fumes come right into her yard. Both her and her children have been sick the whole time the rigs have been there. All of them were angry about the lack of notice and scared about the impacts. They talked about wanting to sell their homes, and about how they would not have moved there had they known this would happen.


One woman wrote an e-mail to me saying, “I would have thought that before these wells were even permitted, that there would have been some communication with the homeowners to allow us some type of say in what is being done in such close proximity to our homes.”


Another woman writes, “I am currently home during the day due to illness and I can neither sleep during the morning much less at night due to the constant drilling noises. This is very disturbing and it is literally impossible to get any rest. We moved here because it was a peacefully quiet neighborhood, now it is not.”


Another woman writes, “I am almost due with our first baby [which] makes me even more upset with the situation. Not thrilled at the thought of bringing our baby home to this.”


A man writes, “I have seen over and over the damage this truck are doing to the road and the sides of the roads…No one was notified ahead of schedule of the events that took place. No Environmental Impact study was done to ensure the safety of the environment prior to allowing the permit to be granted. There is no set warning notification process to residents if there is an accident. We were told the “danger” ring is 1000 ft around a site. This basically means the entire sub-division is as risk with no set notification process.”
You need to deny this permit so that you are not complicit in all these injustices. The people of Denton can see that although you do not agree with drilling so close to homes, there was nothing you could do about these gas wells. But if you let them transport their water over our land you give the appearance that you actually consent to the project as a whole. Could you possibly be legally compelled to give them this permit? They are asking and you are free to just say no. Let them get their right of way through someone else’s land.
Posted by Adam at 8:05 PM