Fracked on their own Petard: Depantsing the Perryman Report about Denton’s Fracking Ban

On November 4th, Denton could ban fracking, forever ridding its neighborhoods of a poisonous specter. Ever since we got the signatures to put the ban on the ballot, support has been growing like a tidal wave. 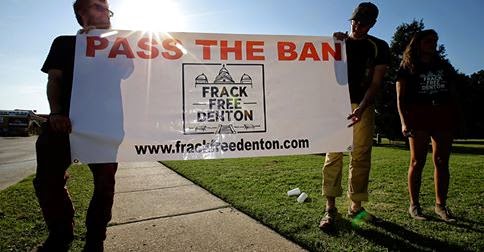 This has the oil and gas industry scared. They are getting desperate.

They’ve taken out full page color ads in the local paper accusing us of being unpatriotic. The head of the Texas Railroad Commission, a man whose campaigns are 80% funded by the very industry he supposedly oversees, insinuated that Russia is behind the ban (I’m still waiting for my check from the Kremlin, but when it arrives, the first round of vodka is on me).

The industry even spent an estimated $50,000 on a counter-petition campaign in support of fracking. For two weeks, out-of-state petitioners, being paid $4/signature (plus hotel and travel expenses), flooded the city. It was a shamelessly dishonest stunt. I was stopped by one petitioner (from St. Louis) in the Kroger parking lot who actually told me that his petition was for a fracking ban. Texas Sharon Wilson caught another petitioner lying on video and several others attested to their annoying and mendacious tactics.

They timed the release of the report to coincide with last week’s epic City Council meeting about the ban that brought in 600 people (sitting in three overflow rooms) and stretched on until 3 a.m. To parrot the findings of the report at that meeting, several industry representatives drove in to Denton, including the former Chief Justice of the Texas Supreme Court (surprisingly, he now works for the oil and gas industry).

Their strategy worked. Media coverage cited the report’s figures, making it sound like the people of Denton would be committing economic suicide if they adopted the fracking ban. And the industry trolls keep shouting the report’s conclusions into their echo chambers.
Now, usually, I find it best to ignore this kind of overt bias. But the stakes are too high. Someone has to call bulls**t. So, here goes:
1. The report is completely one-sided. It is not a cost-benefit analysis of the fracking ban. It is only a cost analysis. The benefits of taking the oh-so-radical move to ban a toxic industry from neighborhoods are not even considered. Yet City Councilmember Kevin Roden is right that a fracking ban will create a local economic boom. More on this later.
2. It is a black box that does not include the data or the model used. Their model relies heavily on economic multipliers, which are easy to abuse to get the findings you want.

3. The Perryman Group is notorious for exaggerating figures to fit their clients’ preferred reality. When TransCanada hired them, the Perryman Group said that the Keystone XL Pipeline would create as many as 550,000 jobs. Even analysts who support the pipeline called their figures “dead wrong” and ‘meaningless.’ An independent analysis by Cornell University found that the pipeline would create only 500 to 1,400 jobs (gosh, Perryman was only off by three orders of magnitude).

4. Don’t forget the rule of the one percent (or less). We know that fracking is a miniscule part of Denton’s economy. Mineral values are just 1.1% of total property values in the city. Minerals contribute just 1% of total property tax revenues, meaning fracking accounts for 0.5% of the city’s General Fund. The mining sector accounts for just 0.27% of the local workforce. The only exception to this rule is that Denton families actually rake in a whole 2% of the total mineral wealth generated in Denton (companies and absentee mineral owners claim roughly 90%).

5. OK, set aside the report’s one-sidedness and hidden assumptions. Set aside the Perryman Group’s track record of hyperbolic industry cheerleading. Let’s take the giant leap to assume the report is not a gross exaggeration. Even then, the report actually confirms the rule of the one percent (or less). To start, it concludes that the ban will cost the city about $501,000 in tax revenues annually. The total annual resources of the City are $826 million, so that's 0.06%.  If we compare their figure just to the City's General Fund (representing the bulk of tax revenues) it's still just 0.5%.


6. The report confirms the rule of the one percent (or less) again. It claims that the ban will cost 2,077 person years of employment over ten years. Yet ‘person-years’ is a flow that accumulates over the ten year period, so the figure actually amounts to 207 jobs. The total workforce for Denton is 67,316, so the impact of the ban is 0.3%. Surprise! That’s about the same number posted by the city, which we have been using, of 0.27%.

Again, though, Denton's gross product will grow over the next decade. If we peg this to population growth, we can get a decent estimate in how Denton's economy will balloon. The expected population of Denton in 2020 is 147,825, an incredible 24% increase from the present population. The same growth in our gross product would mean we revise Perryman's figure down to 0.2%.

To conclude, let’s return to the benefits of a fracking ban (the costs of not banning fracking). Many of these benefits are hard to measure, but very real. Indeed, they may not be easy to count but in the end they are what really counts: health, quality of life, and your right to feel safe in your home and peacefully enjoy your property:
A ban will reduce health care costs (and lost worker productivity) by cutting fracking’s outsized contribution to smog-forming ozone in an area with alarmingly high rates of childhood asthma.
A ban will eliminate the waste of hundreds of millions of gallons of city water, in a drought-prone area, and the risks posed to our groundwater resources.
A ban will reduce the costs of development. A fracking ban means dozens or hundreds fewer gas well pad sites, thus fewer impediments to development and lower taxes to finance it.
A ban will open up more land for more profitable land uses. Gas well sites (often more than an acre in size) chew into residential and commercial development, which produce larger and more sustained revenues.
A ban will protect home values. Fracking reduces nearby residential property values, thus depleting tax revenues.
A ban will protect quality of life. Fracking brings with it: overwhelming truck traffic (it takes more than 1,000 diesel trucks to bring a single well into production), noise and light pollution, and fumes and odors. It takes away your right and ability to enjoy your home.
A ban will attract the workforce of the future. Fracking is a deterrent for the people Denton needs to recruit to fill the high-tech, high-paying jobs that can propel its economy forward. The millenials who are hitting the workforce now want cities with a high quality of life. Poisonous fracking 200 feet from homes doesn’t quite fit that bill. They’ll find jobs, and take their dollars, elsewhere.
A ban will provide peace of mind. Parents won’t have to worry – like Denton resident Maile Bush worries – about the health of their children. How much of a benefit is it to not have a carcinogen-emitting industrial site outside your child’s or your grandchild’s bedroom window?
The industry wants to frame the vote on the ban in terms of a cost-benefit calculation. But they just shot themselves in the foot with this report. When we really look at the numbers (which they doubtlessly exaggerated in their black box) in the context of the local economy, we find that they are miniscule. They are far outweighed by the benefits of safeguarding property rights, water, air, home values, and the health, livability, and safety of our community.